Trust the process of Fun and Innovation

And this is what you will learn more about in this post.

I’m really glad you came to my party today. You are an amazing person and I wouldn’t want to celebrate this without you! We are standing outside in a park on the first day of summer, the sun is shining and everyone feels confident and comfortable. Some pineapple is roasting on the BBQ, giving off a delicious smell that complements the sound of the music coming out from the speakers. You walk around the park and see me standing, we haven’t spoken in a while so you say, “Hey Laurie! Long time no see. How are you doing with this COVID situation? Must have been tough with work, no?”.

This is a question that many people have asked me and every time they got a different answer. Right now, while standing in the park, I close my eyes and start wondering back. 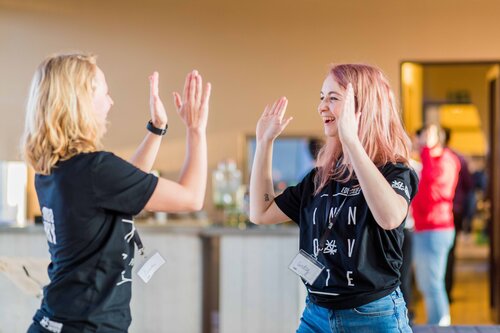 I can still feel the sweaty palms at the door opening where high fives were given on day one. I can hear the BOOM of the exploding confetti cannons in the medieval council hall that marked the beginning of the celebration on the last day. During and after the event a lot of laughs were audible.
The end of 2019 was celebrated in the right way. With almost the complete crew of STUDIO.WHY we facilitated a three day event for the Province of Friesland in which, both in front of and behind the camera, there was a lively atmosphere.

I remember, when all the participants had gone home, we decided to eat and drink something together. While drinking a beer and eating a well-prepared California roll, we looked at each other and felt the intense connection. Something beyond the ‘see you on Monday, colleague’ mentality. A bond that made high performance and aspiration possible by making big and exciting stuff FUN.

The biggest compliment I got from a client at the time was:

“It is so beautiful and infectious that you as STUDIO.WHY have so much fun together, that is really contagious.”

And then BOOM, our friend Corona felt a little left out and wanted attention as fast as possible from as many people as possible. Although she sounds very friendly, I didn’t like her that much. She made people insecure and afraid. Afraid in a way that innovation and collaboration were not prioritized and instead of finding a new way of working, everyone relied on the ‘way we always did it’.

Because of that reaction, we at STUDIO.WHY saw all of our events, training and sprints disappear. Most companies lowered their out-of-pocket costs as much as possible to save money for this uncertain time or invested it in more so-called ‘short term solutions’. A development that required a lot of reflection on our part.

What do you do with a motivated, enthusiastic team that is ready to work hard and make a cultural impact without being requested to organize any events, training or design sprints!? The energizing high fives became emoticons, the confetti cannons changed into Zoom explosions, and the vivid face-to-face moments developed into online irritations. The combination of hard work while having fun changed into confusion and irritation.

For me, there was a correlation between the amount of fun I had and the way I dressed. Trust me, I’m not a girly girl when it comes to appearance, but I noticed a shift that got real when I looked at myself in the mirror. It was on a Tuesday afternoon when I saw a bun on my head, my pink PJs, and two fluffy (not matching) socks.

It felt uncomfortable and scary not knowing what was going on, but seeing that it had a big effect on our team. After two weeks of self-pity, new energy was arising in our group – energy coming from a mindset that we so highly believe in.

Before Corona introduced uncertainty in our lives, most people had the illusion that they had control over complex situations and were able to predict the future. For a long time that can feel safe, but in reality everything around us is constantly evolving, altering everyones day-to-day lives. This was felt by the phone producer NOKIA when they neglected the trend of data communication and the video rental place Blockbuster when they failed to adapt to changes in technology and car supplier Hummer when they overlooked environmental developments.

Is was Charles Darwin who said:

“It is not the strongest of the species that survives, nor the most intelligent. It is the one that is the most adaptable to change.”

What if we create a mindset that continuously looks for opportunities? Opportunities that create value for others and need the involvement of others while creating a new reality? 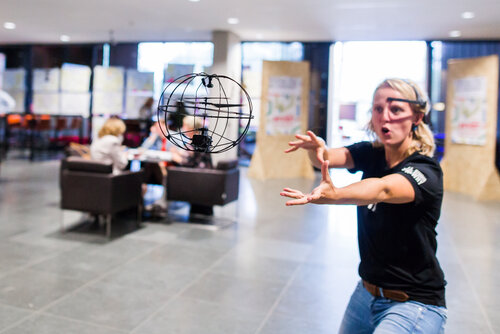 This happens to be the exact mindset that we train people in. And day by day, we started to trust the process. Something we said many times in Friesland. So we started calling all of our clients. Not to sell an event, training or design sprint. No. We really wanted to talk to them to understand what they were going through. With no advice or judgment. Just with the intention to really understand their point of view.

And throughout all these conversations three big similarities were noticeable. They all mentioned difficulties related to:

We finally had a direction to build from.

Slowly and steadily we built an online experience in which we were able to facilitate interaction, connections and results. It was one hell of a ride to figure out how to get the excitement we and our participants had during our offline experiences into the online world.

Together with my colleagues, I had the honor of organizing, amongst other things, multiple three-day Hackathons. The first one was so exciting! Weeks of full time preparation, late night brainstorms and last minute arrangements to organize it as well as possible with the knowledge we had at the time. Bringing personalized packages in a confetti suit to participants houses, using augmented reality to get the pitches into the living room, and digitalize outcomes, that is something we’ve never done before! After the three days, we were super proud and so curious what the evaluation would bring.
The first completed feedback forms started to roll in and I saw an average rating of….6. What?! After all these hours of work, last-minute changes and creative ideas, this was the result! What a big disappointment. But new events were coming and we had to trust the process again. We dealt with all the feedback and in our last experience the recommendation rate was 100%!!
I can now honestly say that as a participant, I would go to the online experience as much as the offline version I used to organize. The amount of ‘experience’, engagement, and learning is as high – if not even higher – than in the offline version. The big discomfort of the online world changed into new opportunities and exciting challenges.

At some point I also started seeing the benefits of the working environment: fancy-ass lunches, walks every day, and closing my laptop at 16:45 means enjoying the outside world 5 minutes later. Instead of traveling, being interrupted, and unnecessary meetings, I plan my own day now. 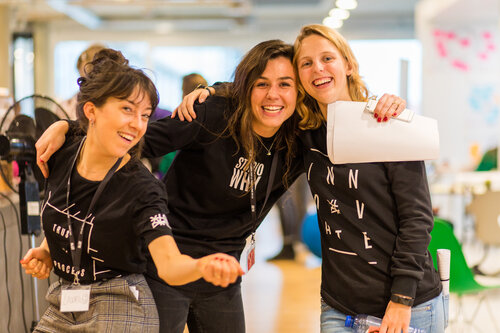 The most important thing is, however, that despite everybody in our team reacted in a different way (and trust me, there were big differences) everyone found their own way of making this situation work for them, both personally and professionally. The ones I looked in the eye with a full mouth of sushi back in 2019, I still feel very much connected to right now – via a screen, a real life outside walk or an emotional talk over the phone. With proper clothes on this time. Yes, I take my time every morning now to put on some proper clothes.

We found our way within the online world. The emoticons became home-delivered surprise packages, the Zoom explosions changed into interactive Spatial Chat meetings, and the online irritations switched to Augmented Reality meetings and virtual dinner parties!

Innovation is a process of adaptation, flexibility, and collaboration. And it is not only the confetti that makes it FUN, it is the whole fucking process!

“HAKUNA MATATA, it means no worries…..”

Timon and Pumbaa suddenly make me realize that I am still in the park. I open my eyes again and I see you. You laugh, ‘were you enjoying the weather’? I laugh back and repeat your question ‘How am I doing?’.  I’ve answered this question so many times. Mostly not with the full truth and in a short version. But right now with you, I really feel like telling you the full-on story. Because being proud is also worth sharing!

“Well, I have to say, we have had some tough times. I cannot and will not lie about that. That is also what being an entrepreneur entails sometimes. But I have to say I’m proud of how we, as a team, handled it. We really rediscovered ourselves in the same way we train other organizations to do. It feels good to speak from own experience from now on. But besides all that, we have so much FUN together and I’m fucking proud to work at STUDIO.WHY.”

You look at me and I look at you. We both feel that this is a special and beautiful day. Without the need to touch each other, we stand there comfortably. We both grab a beer and cheer ‘to all the fun this year will bring us’.

“HAKUNA MATATA, it means no worries…..”

Exclusive Tips For Creativity, Design Thinking And Innovation For Business That You Can Use To Transform Your Work Environment TODAY